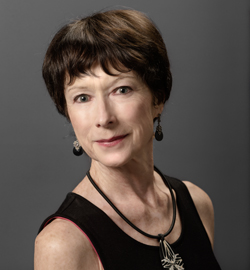 Lorita Travaglia, Creative Director, has an extensive background in dance having had a professional performing career with ballet companies around the world that spanned 22 years.

Ms. Travaglia is originally from New Zealand. She received her ballet training at the National School of Ballet and later the Royal Ballet School in London. Lorita made her debut as a professional dancer with the Berlin Ballet. After six years with the Company, she moved to the United States where she worked with Princeton Ballet, Boston Ballet, Atlanta Ballet and International Ballet Rotaru, dancing solo and principal roles in a wide range of repertoire. In 1992 Lorita returned to New Zealand, but continued to perform as a guest artist with companies in the United States as well as Company Z, a contemporary dance company in New Zealand. Lorita began teaching in 1988 while still performing and studied the Vaganova methodology. She was the principal teacher for a professional training program in Auckland, New Zealand and later, as artistic director of Canyon Concert Ballet in Fort Collins, Colorado; she set up a similar aspirant program. In 1999, Lorita joined Colorado Ballet as director of the Apprentice Program and company repetiteur, and has been ballet mistress there since 2006. Her choreography works include Piazzolla, The Angel of Buenos Aries, both tango inspired ballets for Colorado Ballet, as well as Equanimity, Aspects and Pictures at an Exhibition for Colorado Ballet II and a full-length The Nutcracker for Canyon Concert Ballet.

Lorita has been dancing Argentine tango since 2004. Her main teachers were Nick Jones and Grisha Nisnevich and she continues to study with Gustavo Rosas and Gisela Natoli, when possible, as well as the Argentine Tango Maestros, Gustavo Naveira and Giselle Anne who inspire her continually and act as Artistic Advisors for Parasol Arts.

Her debut tango performance was with Gregory Nisnevich in Parasol Arts’ premiere performance “Tango Love”. They have also performed in “Por El Amor Al Tango” in Albuquerque with QTango in 2013, and at the Tuscon Tango Festival.  Since creating Parasol Arts in 2012, Lorita has directed, choreographed and performed in Parasol Arts’ annual productions. She enjoys exploring the artistic and creative aspects of Argentine Tango and aims to bring inspiration to people from all walks of life in her productions.