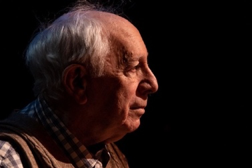 Joey Wishnia, Narrator was born in South Africa and began performing as a child in 1942. He was educated at Rhodes University and received a teaching diploma from Trinity College in London. He joined the professional actors’ union in 1962.. In 1993 he came to Colorado, and since then has been the recipient of many awards and has directed, taught and acted in everything from film to soap operas.

Joey has been a big part of Parasol Arts appearing as Astor Piazzolla in “Piazzolla en sus Palabras”, “A Brief History of Argentine Tango,” “Tango Portraits of Love” and as the voice of the universe in “The Seasons”